On October 5th, the collaboration agreement signature has proceeded between the Spanish Society for the Defense of the Geological and Mining Legacy (SEDPGYM) and the Manufacturing Engineering Society. It’s a Manufacturing Legacy Industrial Group (PATRIF) proposal. This agreement aims to consolidate cooperation between the Societies in the conference development, seminars, training courses and other dissemination actions. Another goal will be the synergistic enhancing effect resulting from the common pursuit objectives in areas such as the Technological Legacy Both SEDPGYM and PATRIF will develop. Will be activities aimed at the preservation and improvement of the Spanish technological heritage. The special focus will be on the first of them in mining assets and elements and the second in those of the industrial sphere.
The agreement signature protocol, carried out by Antonio Pizarro Rosilla (President of the SEDPGYM), and Lorenzo Sevilla Hurtado, (Vice President of the SIF), was held on the X International Congress Mining and Historical Metallurgy in the European SW. (Molina de Aragón ,Guadalajara).
On this act, Prof. Miguel Ángel Sebastián Pérez (Coordinator of the GT-SIF PATRIF), expressed specials thanks both companies for the agreement welcome and collaboration development. Also, he expressed their conviction in the interest and opportunity of its celebration. He highlighted the parallels between SIF and SEDPGYM origins existing. After making a presentation of the SIF and its main activities. Each of benefits has involved identity reinforcement implementation actions and acting areas improvement. Also, we are agree on the opportunity to establish collaborating ways on common issues.

Website of the Spanish Society for the Defense of the Geological and Mining Heritage:
http://www.sedpgym.es/ 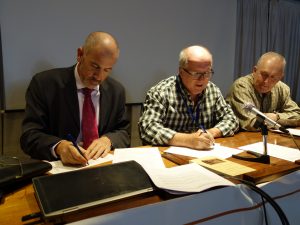 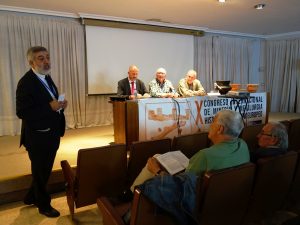 Latest News
Popular News
Categories
If you want to belong to the Manufacturing Engineering Society (MES), you can become a member through the following button.
Become a member
© 2013-2021 Manufacturing Engineering Society
Back To Top
This web site uses cookies for a better experience. We will assume that you agree to this, but you can opt out if you wish. Settings ACCEPT
Manage consent